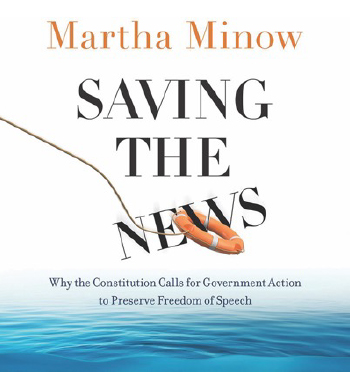 Martha Minow, 300th Anniversary Professor at Harvard University, former Dean of the Harvard Law School, 2009 – 2017 and Harvard Law School Professor since 1981. She is a constitutional law expert and advocate for minorities and disenfranchised individuals. After graduating from Yale Law School, she clerked for Judge David Bazelon of the U.S. Court of Appeals for D.C., then clerked for Supreme Court Justice Thurgood Marshall. She serves on numerous boards including the MacAthur Foundation, the Campaign Legal Center, Carnegie Corporation, the American Bar Association Diversity and Inclusion 360 Commission and more. She has written over 10 books, including Saving the News: Why the Constitution Calls for Government Action to Preserve Freedom of Speech plus several law case books.

Newton Minow is the Former Chairman of the Federal Communications Commission and a leading advocate for the Public Broadcasting Act essential to public broadcasting today. Newton Minow, appointed to the FCC by President John F. Kennedy, changed television with his “Vast Wasteland” speech and continuing advocacy for news that delivers truth and trustworthy commentary. On his 95th birthday, Martha interviewed her father on the state of news today. He now interviews Martha on Saving the News.

Unless otherwise noted, these events will be held at:
The Stevenson Center on Democracy
25200 N St. Mary's Rd, Mettawa (Libertyville), IL   60048


The Adlai Stevenson Center on Democracy is an independent, non-partisan, not-for-profit organization. The ASCD operates out of the Adlai E. Stevenson National Historic Landmark as a licensee of the Lake County Forest Preserve District. The license does not imply the District's endorsement of specific ASCD positions or presenters.